What Is a High Ankle Sprain?

The "high ankle sprain" is named in distinction to the "low ankle sprain." You may have heard the term while watching American football or other sports broadcasts. The high ankle ligaments (also called the syndesmosis) are located above the ankle, as opposed to the more commonly injured ligaments on the outside of the ankle. These high ankle ligaments connect the tibia to the fibula. It is important to have stability between the tibia and fibula at this level because walking and running place a tremendous amount of force at this junction.

A high ankle sprain, also called a syndesmotic injury, occurs when there is tearing and damage to the high ankle ligaments. These injuries are much less common than a traditional ankle sprain.

If there is an associated fracture around the ankle, patients typically won't be able to bear weight on the foot/ankle and often will need surgery. If there is not an associated ankle fracture, patients may notice increased pain with activities that cause the ankle to be flexed up placing more stretch on the injured ligaments. Activities like climbing stairs are the most common as the ankle joint is loaded and the talus bone is driven upwards placing stress on the high ankle ligaments. 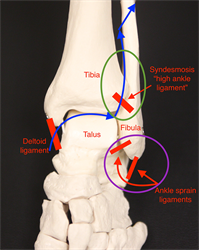 A high ankle sprain occurs from a twisting or rotational injury. They are common in sports, especially impact sports. An external rotation mechanism most commonly causes these tears, when the foot is turned towards the outside with respect to the leg. A high ankle sprain also can occur if the ankle is broken. In some cases, the ligament on the inside of the ankle (the deltoid) will be torn. In this event, the energy of the injury (indicated on the diagram with blue arrows) passes from the deltoid, through the high ankle ligaments (syndesmosis), and up the leg through the fibula. This causes the fibula to be broken at a very high level. This type of fracture is called a Maisonneuve fracture. Patients with a high ankle sprain without fracture may be able to bear weight, but will have pain over the junction between the tibia and fibula just above the level of the ankle (green circle). This is higher than the more traditional sprains (purple circle).

As noted above, the syndesmosis or high ankle ligaments connect the tibia and fibula and allow some rotation. There are three major components of this ligament complex. Ligaments connect bone to bone which prevents bones from moving away from each other and maintains normal movement between the bones, whereas tendons connect muscle to bone, allowing them to move parts of the body. 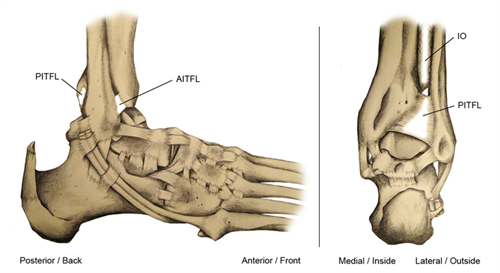 Patients who have a high ankle ligament tear usually will have pain just above the level of the ankle, thus a "high" ankle sprain. They may also have tenderness over the deltoid ligament if they have a Maisonneuve injury, as noted above. It is important to touch the area to assess whether pain is just around the lateral ankle ligaments or higher.

Your foot and ankle orthopaedic surgeon may also perform two tests called the squeeze test and the external rotation test. The squeeze test is performed by squeezing the leg just below the knee to see if pain radiates to the ankle area, which would suggest a high ankle sprain. With the external rotation test, your surgeon will bend your knee and place your ankle in neutral or 90 degrees with the foot in relation to the leg, and the foot is turned to the outside. If there is pain at the ankle area, this suggests a high ankle sprain.

X-rays are very important. A broken bone must be looked for. Three views of the ankle including the whole leg are needed. A fracture on the back portion of the tibia may indicate an injury to the high ankle ligaments given that this is where the PITFL attaches. It also is important to look for increased space between the tibia and the fibula as the high ankle ligaments keep these bones in place. Special imaging may be used, such as an MRI or CT scan, to assess the relationship of the tibia with the fibula.

The goals of treatment are to move the tibia and fibula to the correct positions with respect to each other and to heal in those positions. This allows the ankle joint to function as intended. It is very important to note that these injuries can take a lot longer to heal than "low" ankle sprains. If you have a sprain but do not have a broken bone, the treatment immediately following the injury is to rest the leg, ice for 20 minutes every two to three hours, gently compress the leg with an ACE wrap, and elevate the leg with the toes higher than the nose. You may have enough tenderness to require a removable walking boot. Physical therapy may include strengthening the tendons on the outside of the ankle called the peroneals, as well as getting back the movement in the ankle and returning to activities.

It can take up to 6-8 weeks to return to normal activity, but can sometimes take even longer. A general rule of thumb is that bones take roughly six weeks to heal while soft tissues (e.g., ligaments) take around three months to heal. One good indication that you are ready to go back to sports is if you can hop on the foot 15 times. This hopping test is acceptable if there is no obvious widening between the tibia and the fibula on X-rays. If there is widening, which is called diastasis, or if there is a broken bone, surgery may be needed. There is debate as to how to properly fix these injuries, but the idea is to put the fibula and tibia back together and hold them with either screws or new devices that contain a suture, which is the same type of material used to close wounds.

As mentioned above, the recovery for high ankle sprains can take considerably longer than typical ankle sprains. In those cases in which a separation of the tibia and fibula or fracture has occurred and surgery is necessary, patients will likely need to be non-weightbearing in a cast followed by a walking boot for about 12 weeks. It is important to do early range of motion passively, meaning with the help of a physical therapist who moves the ankle, to help avoid stiffness. The screws commonly are removed in a second, small surgery before full weightbearing is allowed so they will not break.

Outcomes generally are good if the injury is recognized and treated appropriately. It is more likely, however, to have some stiffness of the ankle after a high ankle sprain as compared to a standard ankle sprain. This is especially true if a fracture has occurred.

Stiffness can occur in the ankle. If surgery is performed, one can have an infection or damage to one of the nerves that provides sensation to the top of the foot called the superficial peroneal nerve. This is because that nerve runs very close to the outside of the leg where the incision is commonly made. Arthritis also can develop from a very severe sprain if the cartilage of the ankle is damaged at the time of the original injury.

Should I be concerned if I have sprained my ankle and it is not better after six weeks?

Yes. It is probably worth seeing a foot and ankle orthopaedic surgeon to assess if any other injuries have occurred. Sometimes high ankle sprains can take that long or longer to heal, but it is wise to make sure that another injury has not occurred.

The American Orthopaedic Foot & Ankle Society (AOFAS) offers information on this site as an educational service. The content of FootCareMD, including text, images, and graphics, is for informational purposes only. The content is not intended to substitute for professional medical advice, diagnoses or treatments. If you need medical advice, use the "Find a Surgeon" search to locate a foot and ankle orthopaedic surgeon in your area.