What Is Adult Acquired Flatfoot Deformity?

In addition to tendons running across the ankle and foot joints, a number of ligaments span and stabilize these joints. The ligaments at the inside of the ankle also can become stretched and contribute to the progressive flattening of the arch.

Several muscles and tendons around the ankle and foot act to counter-balance the action of the posterior tibial tendon. Under normal circumstances, the result is a balanced ankle and foot with normal motion. When the posterior tibial tendon fails, the other muscles and tendons become relatively overpowering. These muscles then contribute to the progressive deformity seen with this disorder.

As the tendon fails over time, deformity of the foot and ankle may occur. This deformity can include: 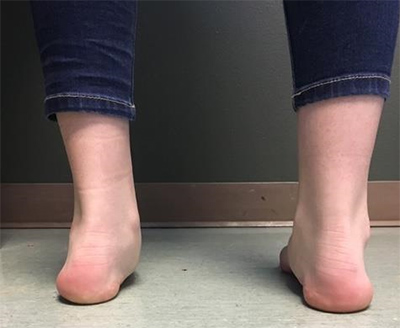 A patient with AAFD of the left foot. You can see that the heel has shifted outward and is no longer aligned under the leg.

Posterior tibial tendon dysfunction is the most common cause of AAFD. Often there is no specific event or injury that starts the problem. More commonly, the tendon is injured from "wear and tear" over time. Posterior tibial tendon dysfunction occurs more commonly in patients who are born with a flat foot or who develop the condition for other reasons. With a relatively flat arch, more stress is placed on the posterior tibial tendon and also on the ligaments on the inside of the foot and ankle. The result is a progressive disorder. Weight also plays a role in the progression of this disorder. For overweight patients, significant weight loss may lead to some improvement of symptoms.

The diagnosis of posterior tibial tendon dysfunction and AAFD usually is made from a combination of symptoms, physical exam and X-rays. Your foot and ankle orthopaedic surgeon will look at the location of the pain, shape of your foot, flexibility of the hindfoot joints, and how you walk to make the diagnosis and assess how advanced the problem is.

Treatment depends very much upon a patient's symptoms, goals, severity of deformity, and the presence of arthritis. Some patients get better without surgery. Rest and immobilization, orthotics, braces, and physical therapy all may be appropriate.

With early-stage disease that involves pain along the tendon, immobilization with a boot for a period of time can relieve stress on the tendon and reduce the inflammation and pain. Once these symptoms have resolved, patients may transition to using an arch support or orthotic that supports the inside of the hindfoot. For patients with a more significant deformity, a larger ankle brace may be necessary. Non-surgical treatments for more advanced stages of AAFD may slow the progression of the disorder and limit symptoms, but they will not fix the deformity

If surgery is needed, a number of different procedures may be considered. The specifics of the planned surgery depend on the stage of the disorder and the patient’s specific goals.

Procedures may include ligament and muscle lengthening, removal of the inflamed tendon lining, tendon transfers, cutting and realigning bones, placement of implants to realign the foot, and joint fusions. In general, early stage disease usually can be treated with tendon and ligament procedures with the addition of osteotomies (cutting/shortening of bone) to realign the foot.

Later stage disease with either a rigidly fixed deformity or arthritis usually is treated with joint fusion procedures. Fusions involve removing the joint that connects two bones, so that they become fixed together. These procedures allow powerful correction of bad deformities, leading to increased stability and pain relief; however, they also lead to a stiffer foot and loss of motion.

If you are considering surgery, talk to your foot and ankle orthopaedic surgeon about the specifics of the planned procedure.

Anticipated recovery after treatment for AAFD varies considerably depending on the treatment. Non-operative treatments usually involve use of a boot until symptoms subside and then an orthotic or brace. Almost all surgical treatments require a period of immobilization and restricted weightbearing that can range from several weeks to several months. More involved procedures that include a tendon transfer, osteotomy, or fusion may require a longer period of recovery. Typically, patients do not experience complete improvement until 1-2 years after surgery.

If I am not treated with surgery, will I have to wear the orthotic or brace for the rest of my life?

Traditionally it has been thought that orthotics and/or braces would need to be used by a patient for the rest of his or her life. Such devices serve to supplement the dysfunctional posterior tibial tendon and help realign the foot. Some studies, though, have suggested that adequate bracing and strengthening may allow the posterior tibial tendon to heal and therefore avoid permanent brace use. This may be the case in select situations. Patients with more severe deformities and more damage to the posterior tibial tendon are more likely to need to wear the orthotic or brace long term.

Will my deformity get worse over time? If so, will it be harder to treat?

The American Orthopaedic Foot & Ankle Society (AOFAS) offers information on this site as an educational service. The content of FootCareMD, including text, images, and graphics, is for informational purposes only. The content is not intended to substitute for professional medical advice, diagnoses or treatments. If you need medical advice, use the "Find a Surgeon" search to locate a foot and ankle orthopaedic surgeon in your area.